Actually, I can’t really call these ones Black Forest Brownies. Why? Everyone knows there’s a Schwarzwälder-Kirschtorte-rule in Germany, which prohibits to name any cake Schwarzwälder Kirschtorte / Black Forest Cake that doesn’t meet the criteria. This rule really exists and is fixed by law. Because we Germans love law and order, and seriously, what deserves to be regulated by the state, if not cakes?
I didn’t put any Kirschwasser (cherry brandy) into my brownies, because I’m a poor student and I didn’t have any at hand.
Hence I’m praying none of the cake detectives will read this blog and lock me up.

These brownies are basically my go-to recipe, to which I just added some cherries. And here’s how you make them:

Combine butter, sugar and eggs and beat until light. Then add the melted dark chocolate. 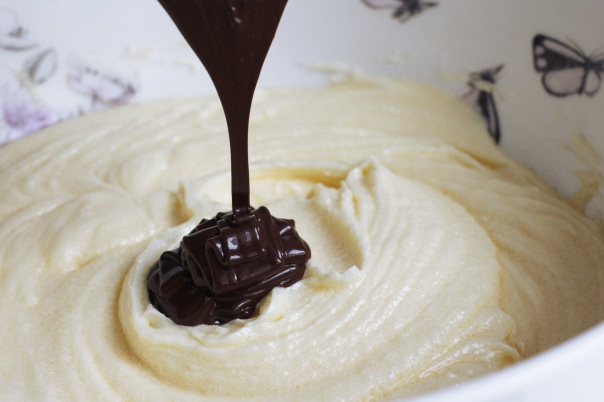 Look at this sexy glossy chocolate. Isn’t it beautiful?

Add flour and cocoa powder and mix just until combined.

Then add the cherries and chopped dark chocolate and fold them into the dough. These colors are amazing. Mmhhh.

Put everything into a brownie pan and bake the dough for 30 minutes at 180°C. Check if the brownies are ready (insert a toothpick, it should come out clean with no batter on it), but try not to bake them much longer, as they won’t be as moist and delicious.

Let them cool a bit, but just a bit, so you don’t burn your fingers. Cut them into 20 pieces and then immediately serve them warm with whipped cream and cherries on top.

Ohhhh yeah. Warm brownies with cream and cherries and pieces of melted chocolate inside!